I’ve spoken about my cooking inspiration before and can never say enough about it. My Aunty Joyce has been my inspiration in the kitchen since I can remember. Every time we visited her and my Uncle John there was always something delicious to eat. She makes the best shortbread in the world. When we would visit them there would always be a tin of her best waiting to welcome us. She would have to hide it from my Uncle John, because once he tasted one, he couldn’t stop himself from more. He knew she would hide it too, so there was always a hunt for the tin just before the nieces arrived.

So over the years we always referred to the shortbread as Aunty Joyce’s Shortbread. Last year I decided to ask her for her recipe and she willingly wrote it down in a letter sent in the post. I wanted the recipe in her handwriting, I didn’t want a What’sApp or email version. There was a deep need in me that wanted a part of my Aunty Joyce in her recipe . By her writing it down there would be provenance in handing it down to me. I was like a little girl at the postbox eager to receive it.

I had tried my hand at various versions, but I just couldn’t recreate my Aunty Joyce’s version. There was something off about every single attempt. Going in search of a cook book called “Let’s Try Some Scottish Cooking”, I found a recipe from Culzean Castle dating back to 1777. With only 3 ingredients necessary, one has to make sure you are using the very best quality butter. Their recipe only uses, butter, sugar and flour. There are earlier recipes of shortbread dating back to the 1200’s. This was a different version of shortbread that used leftover bread dough twice baked like a rusk. Yeast was eventually replaced with butter to create the shortbread version we are familiar with today. It wasn’t until Mary Queen of Scots (1542 – 1587), came on the scene in the mid 16th century that shortbread became something of a luxury.

The recipe arrived in the post and I wanted to get cracking the self same day.

I was eager to get this shortbread in the oven. Enthusiastically I doubled the recipe. On gathering the ingredients, I discovered I didn’t have enough Maizena. Cornflour and tapioca flour, (a gluten-free starch extracted from the cassava root, can be used as an inexpensive and versatile thickener) do much the same thing, so I substituted part of the cornflour with tapioca flour. It works, but it was not My Aunty Joyce’s recipe. My poor Kenwood groaned under the load of butter, flour, sugar and cornflour and tapioca flour. I turned the machine on a little too quickly to be almost covered in flour. The splash guard prevents these kinds of messes and I had removed mine long ago.

Learning as I go

I pressed the dough into my baking tray and used the tines of a fork to create the traditional holes. Into the oven it went. I kept checking and after the required time, I took it out of the oven. It looked a little too pale and I should have trusted my observation and kept it in the oven longer. I had forgotten that I had already messed with the original recipe by doubling it. This meant I should have kept it in for about 15 minutes more. This is how I learn, always the hard way, making mistakes and trying to recover from them. The good thing is I know tapioca flour works. Another thing I leant is that you can put shortbread back in the oven to freshen up. So if yours goes a little soft twice bake it.

Salute to You Aunty Joyce

The following recipe I’m sharing with you is a salute to my Aunty Joyce. She’s the blondie in this recipe and I’m the brunette. I’ve converted cups and spoons to grams and scaled the recipe to my Kenwood machine and my baking pans. Blondie Brunettes will become my recipe inspired by my Aunty Joyce, while shortbread will remain Aunty Joyce’s Shortbread. Thank you Aunty Joyce and Uncle John for the incredible role you continue to play in my life. I’m so grateful to have and extra set of “parents”, I still believe I’m the Favourite Niece 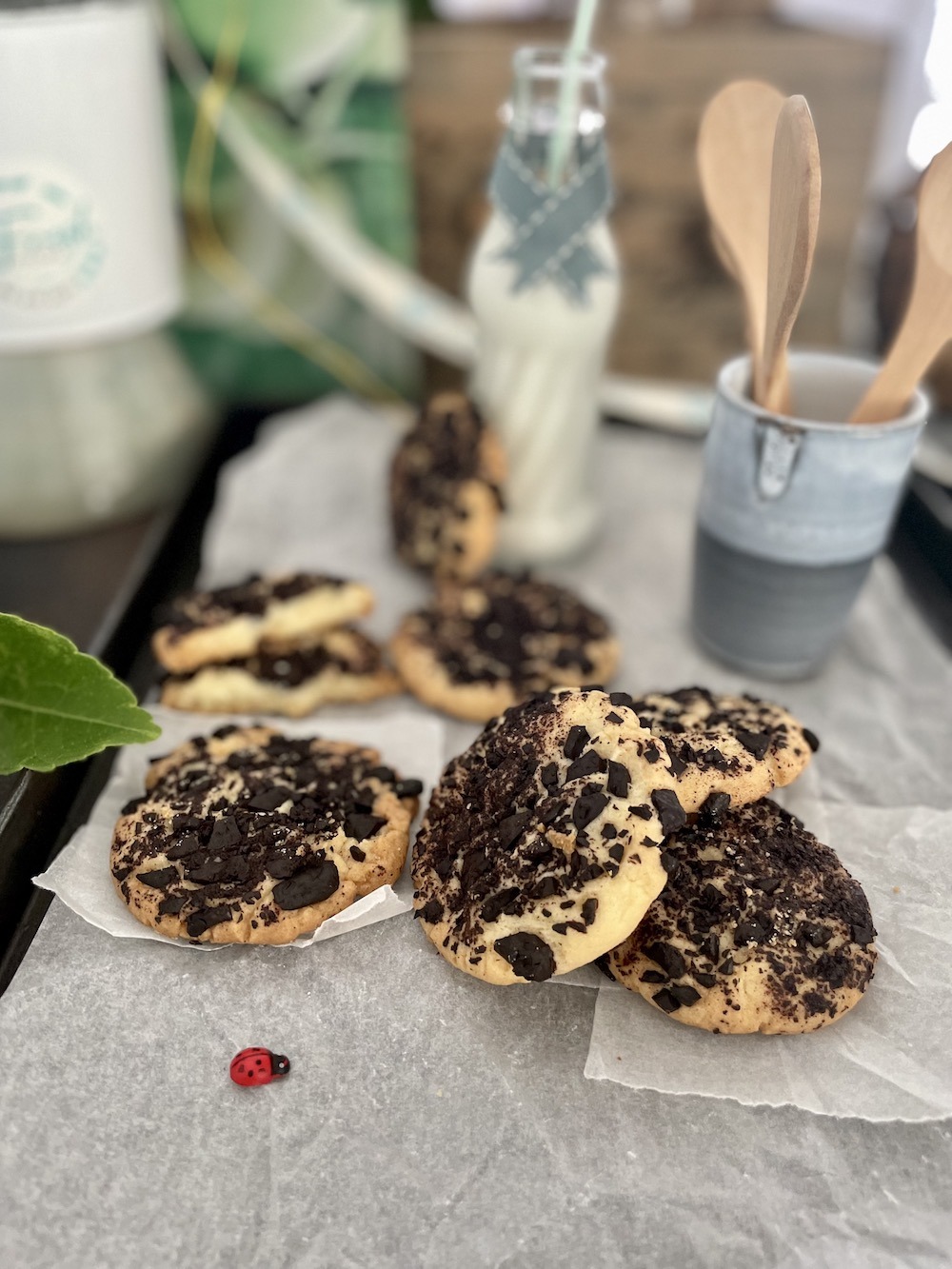 Other Recipes You May Enjoy

Asparagus and Courgette Quiche for Mom’s with sore hearts

Seed cycling my hormones back in balance